The history of the Gdansk Library

In Gdansk, the idea to establish a public municipal library, which could be used by a school reflecting the Protestant spirit that had operated in the city since 1558 – the predecessor of the Academic Gymnasium – was launched in the mid-16th century. Its collections, administered by the Council of the City, were selected in the Catholic spirit, which was inconsistent with the ideological foundations of the Gymnasium. On 25 August 1591, the Italian marquis Joannes Bernardinus Bonifacius d’Oria was shipwrecked together with his grand Renaissance book collection at the mouth of the River Vistula. Paradoxically, the disaster turned out to be a stroke of luck for the city. 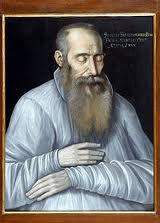 Phot. 1. Bonifacio’s posthumous portrait painted by A. Möller in 1597

Bonifacio was born in the family of an opulent patrician in Naples on 10 April 1517. He was very carefully educated. Owing to his studies and environment, he developed a fondness for the Renaissance, and in particular humanistic culture, which was expressed in his bibliophilic passion. He collected books in the area of theology, law, medicine, philosophy, grammar, mathematics, and astrology, marked by high scientific and artistic value. Among them were works by eminent Antique, Renaissance, and Reformation authors, issued in exquisite editions by excellent Italian, French, Dutch, and German publishing houses.

As a result of such education and his love for reading, the marquis was a man of highly independent thinking, who became interested in the teachings of Martin Luther and Philip Melanchthon, which, unfortunately, attracted the attention of the Naples inquisition tribunal. As a result, he was made to leave his homeland and from 1557 onwards travelled across Europe as a perpetuus viator to finally settle down in Gdansk in 1591. Bonifacio offered his collection of books consisting of more than 1500 volumes to the Council of the City of Gdansk, in exchange for lifelong care.

On 22 June 1596, five years after the above events, Bibliotheca Senatus Gedanensis, i.e. the Library of the Council of the City of Gdansk, was officially and ceremonially opened. Bonifacio died soon after, on 28 March 1597. Today, his books are kept as a separate collection and remain under special care. Bonifacio’s collection also opens up Index librorum – the first accession register of the Gdansk Library. Bonifacio is also the author of a volume of religious hymns, epigrams, and maxims posthumously published in Gdansk (Miscellanea hymnorum…, Dantisci 1599). 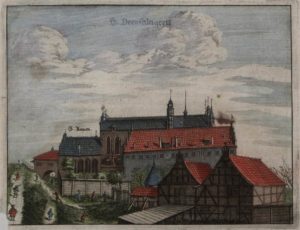 The first seat of the Library was located in the Academic Gymnasium – the former Franciscan monastery, which the Council of the City of Gdansk obtained in 1555. The Library of the Council of the City of Gdansk was situated in a ground floor hall in the eastern wing of the monastery. As the book collection grew, it was subsequently stored in four (rather than five, as was shown in a copperplate attributed to Andrzej Stech and included in Reinhold Curicke’s work Der Stadt Danzig historische Beschreibung, Amsterdam and Danzig 1687) large halls. It was only in 1756 that the Library was extended to include the fifth, largest hall (auditorium anatomicum). 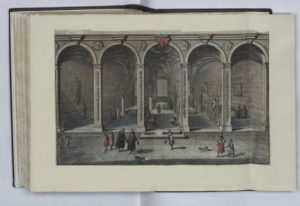 Phot. 3. Interior of the Library of the Council of the City. [in:] R. Curicke, Der Stadt Danzig historische Beschreibung, 1687.

Gdansk obtained a public institution with a rich Renaissance book collection, which could be used not only by the Gymnasium students and teachers, but also the local inhabitants, as an encouragement and assistance in the development of their knowledge.

Bonifacio initiated the beautiful tradition of the donation of private book collections to the Library. His example was followed by Gerhard Brandes, Gerhard Cimmermann, Rafael Knofius, Bartolomäeus Keckermann, Peter Krüger, Jakob Breyne, Elisabetha Brandes, Valentin Schlieff, Michael Christoph Hanow, Jakob Theodor Klein, Gottfried Lengnich, Gabriel Grodeck and Johannes Hevelius. However, the rational politics of the collection of books was mainly based on purchases, the scope and financing of which were determined by the School College that supervised the Library as a municipal body. Another important source of books was the obligation, introduced by the Council of the City in 1660, under which printers were to provide one copy from each edition of the books they printed to the library collections. In this way, the Library received copies of all the locally published books. 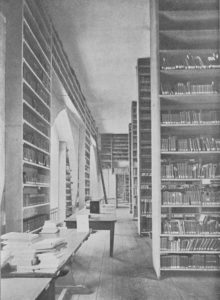 In 1817, the Gdansk gymnasium was wound up, subsequently causing the change of the location, status, and name of the Library, which was henceforth named the Gdansk Municipal Library (Danziger Stadtbibliothek).

August 1819 witnessed the beginning of the project of moving 26,000 volumes to a part of St. Jacob’s Church, which was rebuilt after the explosion of the gunpowder kept in the monastery gate. Before moving the collections, the interior of the church was adapted for library purposes, but the conditions were far from ideal. 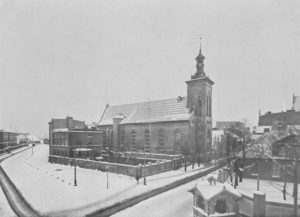 After a two-year break, the Library was reopened for readers on 3 October 1821. Despite the fact that the facility was extended to include the eastern part of the church, it was as early as in the mid-1890s that shortage of space for the collections, which in 1899 totalled 111,000 volumes, began to be apparent. 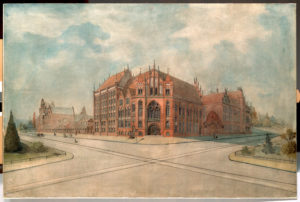 The rooms in St. Jacob’s Church were not appropriate for library work and did not provide the appropriate conditions for the storage of book collections. It was from the very beginning that the seat was considered provisional and temporary, and every so often efforts were reinitiated to change the situation. Initially, the city authorities planned to adjust one of the existing buildings for library purposes, but the idea was soon discarded for the benefit of the erection of a new seat.

The implementation of the project was commissioned to the municipal inspector Karl Kleefeld, who designed a brick neo-gothic building entirely meeting the principles of the library architecture of the time by simultaneously providing for the two functions of the library as a scientific institution and a public and educational facility. With the thought of future readers in mind, the Library was located next to the Royal State Archives, so as to make it easier for them to use the mutually supplementing resources kept by both institutions. 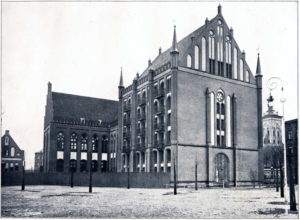 70 years after the opening of the new seat, which took place on 12 February 1905, it became necessary to extend the Library – a project which was carried out at Łagiewniki Street between the Library and the General Education Upper Secondary School No. 1.

It is in its seat referred to as the historic one that the Library continues to fulfil its mission, consisting in the protection of the heritage it has been entrusted with and the simultaneous provision of top quality library and reference services. 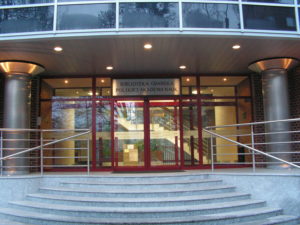 Phot. 8. Entry to the new building of the Library (24 Wałowa Street)

Towards the end of the 20th century, the storage space once again became insufficient, and the continuous growth of the collections began to endanger the strength of the building. It was for this reason that efforts were made to extend it – this time along Wałowa Street. However, it was finally decided that an independent building would be built on the opposite side of the road (at 24 Wałowa Street). The completion of the building project was possible owing to the provision of co-financing from EU funds. The project was extended to include the adaptation and renovation of both library buildings, which additionally made it possible to return the historic seat to its former glory.

The initial concept of the functionality of the new seat was modified to include, apart from the reading rooms and the main storage area (for works published after the end of the Second World War), several departments, including Collections, Cataloguing and Indexing, Circulation and Scientific Information, and slightly later also laboratories, including Theatre and Ephemera Studies, and Paper Deacidification, as well as quiet rooms. 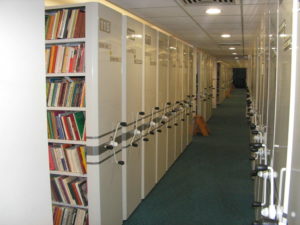 Phot. 9. The storage area of the new building of the Library.

To the satisfaction of the scientific and cultural communities of the Tri-City, on 18 November 2005 – exactly one hundred years after the opening of the then-modern library building – the new building of the Gdansk Library was ceremonially put into service, providing better storage conditions for the collections and offering users their improved use.